How Imagine Cup Inspired Me.. 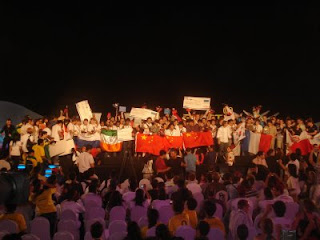 Imagine Cup is a competition that is different than any other one..

I am so lucky that I have had an opportunity to attend Imagine Cup world wide finals this year in Egypt, July 2009. It is indeed the most spectacular event I've ever been to, but I believe its success is not because of us MSPs, but because of all those great students who inspire the world with their ability to change it, with their ambitions and motivation!

Apart from all the fun and joy I've had, I've been so much inspired by the Imagine Cup experience. The people I've met from everywhere inspired me and made me feel I need to work harder in order to achieve my dreams.. I really do.. I also feel that I have the ability to change the world as much as they did. I have more faith now and confidence in me. I believe in myself and my abilities more than any time before...Two people (Roger Lawrence and Yaroslav Tretyakov) told me that I have great skills, thanks to them, they gave me so much support and confidence..

Thanks to Imagine Cup, I feel like I'm a new person... I can honestly say that the people I've met at Imagine Cup, the technologies I've seen, everything changed my life to the extreme...

Thanks to all my new friends from all over the world: competitors, judges, MSPs, Microsoft staff, everyone.. Thanks to God for giving me such a great time..

Hope you are inspired, hope I'll be able to change the world and spread the inspiration...

And finally, I took a vow to do anything just to be in Imagine Cup Poland 2010... See you all there!!
Tweet
Follow @evronia
Posted by Evronia at 5:31 PM